Back to all posts

What inspired me to write the DRAGON'S BLOOD musical

When my father-in-law passed away, my wife ended up with a bar ornament that her father possessed.  It is about 8 inches high -- a dragon with spread wings and holding some kind of hops-related plant in its claw (broken off years before we acquired it).  On its base there are the words: "Dragon's Blood, Brewed By Flowers".  Here is a photo: 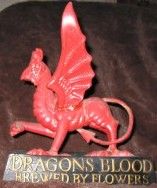 The Flowers Brewing Co. existed in the U.K. and produced a beer called "Dragon's Blood".  According to info. on the internet, that brewery closed in 1961.

Since this bar ornament is in our living room I see it every day.  One day a song suddenly came to my mind -- about a vampire offering a concoction of dragon's blood, brewed with exotic flowers, to a young woman, in order to turn her into his vampire bride.

Now that I had written this crazy song I had a problem -- the song had nowhere to go.

This problem had happened to me once before.  I had written an xmas song and it had nowhere to go. I solved that problem by giving myself the challenge of writing 11 more xmas (or New Year) related songs, so that this first song would have a home -- its own CD.  My "Dragon's Blood" song sat around for many months and my subconscious must have been working on the problem because, one day, the idea of writing a musical came to me.  A central scene in the musical would be (you guessed it) a vampire offering a dragon's blood concoction to a beautiful young woman.

Once I had the plot worked out, I re-examined the songs that I already had written, but that I had wanted to re-arrange (in order to produce better versions).  I discovered that, with just a few lyrical and musical changes they would fit into my developing musical.  For other scenes, I wrote new songs from scratch.

So the Dragon's Blood musical (with 24 songs in it) came about because I needed a home for a single song that was inspired by a bar ornament!